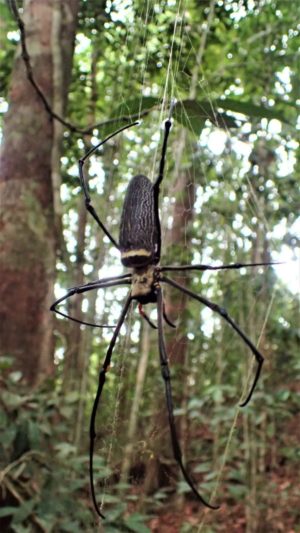 From the moment we arrived at KOPEL’s EcoCamp, it became abundantly clear that not everyone was enthusiastic about the multitude of invertebrates that inhabit Borneo’s rain forest ecosystems as I was. More specifically, there seemed to be a distinct sense of terror surrounding the many (and some of them, frankly, quite large) spiders that had made their homes in proximity to our sleeping quarters. Our first night at the EcoCamp, I heard a loud yELp from the camp next-door, followed by a disembodied shout for my assistance (as our resident spider enthusiast) to “get rid of it”. Not the kind of affection I personally associate with these big, fuzzy beasts that hang out in the jungle, but understandable from the perspective of the widespread arachnophobia that has popular opinion in its clutches.

From then on, it became my mission to help each member of our team (at their own pace, of course) overcome at least some degree of their fear of the thousands of species of spiders that call Borneo their home. My plan of action: convert my fearful peers via knowledge, exposure, and individual-based comfort levels.

It’s understandable to me that creatures who sport 8 legs, (usually) 8 eyes, can produce 7 different kinds of silk from their rear-ends (spinnerets), and attack their prey with a multitude of skills that include speed strikes, stealth attacks, and sometimes massive fangs, would be somewhat spooky to the average individual. However, the innate fear of their objectively alien form aside, there seemed also to be fear rooted in wide misunderstanding of these delicate and elegant creatures. Many seemed to believe that spiders would go out of their way to harm humans and instinctually flinched away from even a small spider in their proximity. I combatted this misunderstanding by allowing smaller spiders to explore my hands, arms, and legs, showing people that not only did they mean me no harm, but they displayed exceptional curiosity and intelligence. 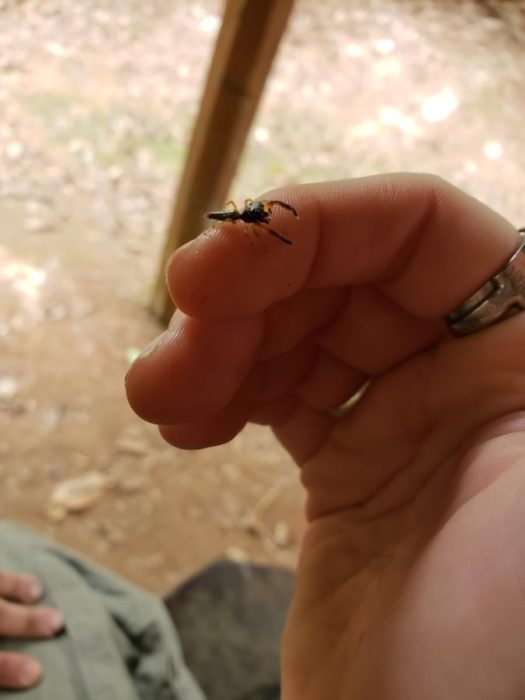 “They aren’t out to hurt you whatsoever,” I’d explain, “There’s no way that a little guy like this could possibly see you as anything other than a terrifying moving jungle gym, much less an item of prey to attack.” Spider venom seemed to be a large concern as well, but I assured my classmates that only 25 species out of ALL SPIDERS had potent enough venom to have an effect on humans (National Geographic), and even those spiders (as well as most other species of spiders) aren’t aggressive unless you really provoke them. Spiders are infinitely more likely to run away from you than stand their small bit of ground. Even the Big Boys in our camp, the Huntsman Spiders (genus Heterapoda), who totally could have spooked away even the most determined hairless primate, skittered away at the slightest confrontation from humans in a flash of fuzz and freakishly long legs.

In the end, I am happy to report that through a combination of my constant stream of Spider Facts and seeing the multitude of jungle spiders mind their own business far far away from human reach, each and every member of our team not only showed a decrease in their fear of spiders, but was able to find a new appreciation and respect for these magnificent, web-weaving beauties. Well, maybe they wouldn’t call them beauties, per say, but you get the picture.