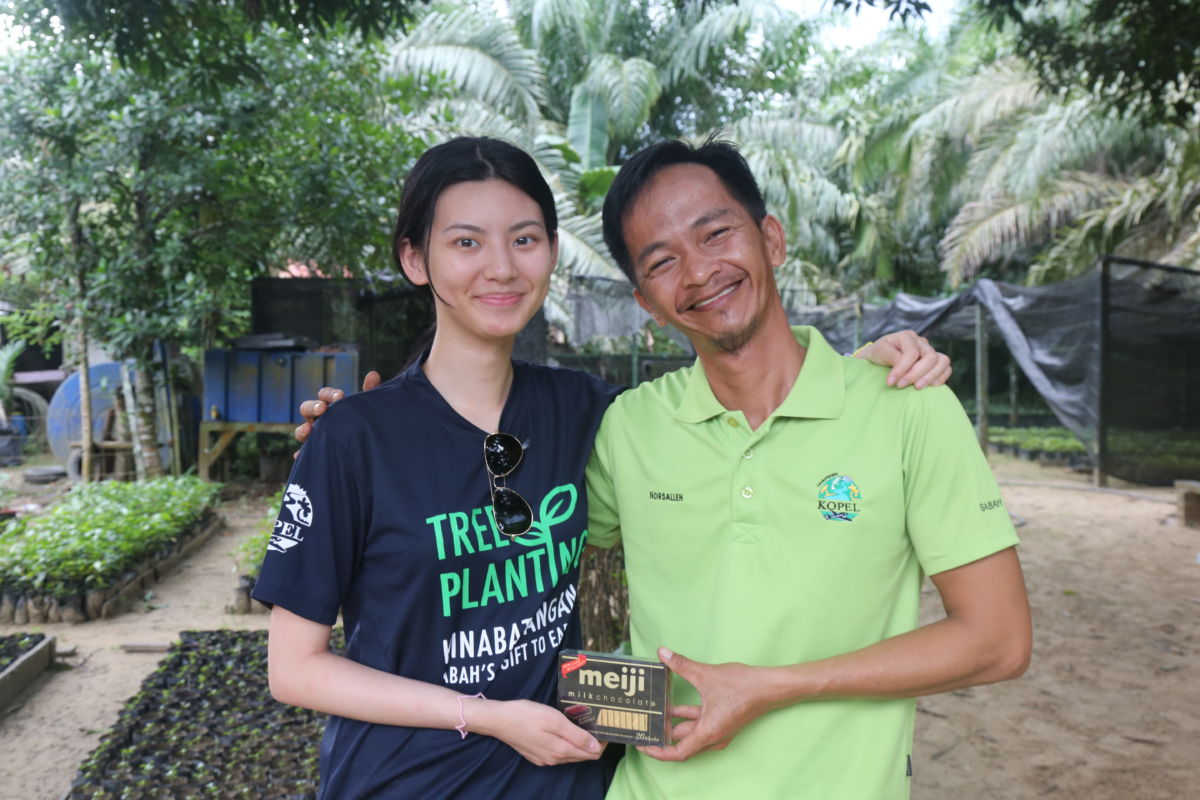 This was my first time experience traveling to a tropical rainforest. From two weeks in June, I changed from an AP environmental science high school student in Los Angeles to a passionate observer who loves nature and its wonderful plants and animals. At the beginning when I first arrived in Borneo, I found the weather hot and humid just like my home city Shenzhen of 12.5 million people; however, the biggest difference between the two places is that  Borneo has few people but so many wild animals, some unfortunately endangered. Especially in the forest, there are so many kinds of species: Orangutans, Proboscis monkeys, Sunbears, Bearded pigs and the beautiful Hornbill birds, all I have never seen before. Furthermore, what I like more are the trees and plants in the forest. They are different in forms, some of them are really tall as if they can touch the sky, some have fruits that can fly from the tree like little helicopters. Then there are colorful wild mushrooms and beautiful orchids growing hundreds of feet up in the air on tree trunks. I was like in a Disneyland of exotic plants and animals. But the most popular trees here is the oil palm. In the beginning, I was confused at why oil palm can make environmental damage. David and Professor Yip told me that people plant oil palms for making money, but the spread of oil palm plantations all over the land decreases other animal and plants and causes the loss of biodiversity.  I have left Borneo to return to China and later in the summer back to America, I will join the campaign to help stop the killing of rare animals and plants, and restore ecology of the precious rain forest.  We youths around the world can surely make a difference if we pitch in our efforts, this is my firm belief after this life-changing experience in the tropical rainforest of Borneo.  Thanks to all the organizers for making this possible!

As Adjunct professor at Stanford Continuing Studies and UC Berkeley Extension, I had the opportunity to accompany my mentee Violet Zeng and join Dr. Gretchen Coffman’s exciting University of San Francisco’s Tropical Restoration Ecology class in the Borneo jungles. We are like Alice who just entered her Wonderland, except this time it is full of exotic plants and animals, and friendly natives and passionate people who have come from faraway. Accompanied by photographer and wildlife conservationist David McGuire (also an adjunct professor at University of San Francisco)  we experienced two weeks of exciting jungle adventures made us contemplate how we could return to China and America and help in our small way to promote the cause and support ecology restoration.  One avenue we identified is through promoting eco-tourism, especially among ethnic Chinese population in China and America, whom we know the best.

Borneo, especially the Malaysian State of Sabah has been was called Malaysia’s “Golden Goose of Ecotourism” and it received 3.4 million visitors in 2016, more than a million from China alone!  But among our Chinese friends, many have barely heard of the words “Borneo” or “Sabah”, and probably 99.99% have never come here for an ecotour, even if they have already travelled to London, NY, Hong Kong, Paris, or even their popular vacation destinations such as Hawaii, Mauritius and recently Antarctica!.

It is projected that with annual growth of 6% that by 2022, China would send out 200 million outward-bound tourists, and by then they will not be satisfied to just visit famous sights such as the Eiffel Tower, Golden Gate Bridge, Venice Gondolas, and enjoy shopping for luxurious branded goods and partake in fine dining, and of course do billions of selfies to send home or post on their Wechat accounts!  Especially the younger crowd of post-1990 (my sons’) and post-2000 (Violet’s) generations, who grew up knowing English and world culture and trends, they will be looking for something exciting, something “cool”, something socially-responsible, even something green and ecological as preferred vacation and tourism themes.
This is an golden opportunity to promote ecotourism among the Chinese and we have the following specific strategies and tactics in mind:
1) Make sure there are private major joint ventures and government agreements between Sabah/Malaysia and China that promote ecotourism in Sabah for the targeted huge Chinese population.
2) Chinese love movies, but Violet and I could not recall a single Chinese movie about Malaysia, let alone Sabah!  Making a movie with 1-2 of their beloved movie stars that uses Sabah as background will catapult it to the front as far as name-recognition is concerned.
3)  Even though their Chinese elders’ generations have the infamous tradition of being mainly responsible for the world illegal trade in Shark fins, Rhino horns, Elephant tusks, and now Pangolin scales, young Chinese are a passionate lot and have stood solidly behind recent Chinese campaigns for alternative energy, against air pollution, food and plastic waste, as well as other environmental causes.  Two of mentees Alice and now Violet, both known to David and Gretchen, have successfully persuaded their parents not to consume shark fin or pangolin meat!  (unfortunately, both their fathers still smoke cigarettes non-stop!)
4) The last advice is to work with their emerging airlines, especially the ambitious Hainan Airlines, to open up cheaper direct flights from more Chinese cities, much like how bargain airlines such as AirAsia have helped Sabah tourism in the past decades.  Chinese tourists also like packaged tours so working with major Chinese agencies such as their China Youth Travel Agency and their famous Ctrip.com (their version of TripAdvisor) will make Sabah rise as a destination for future Chinese tourists.
But a word of caution before we end: the Chinese have a long tradition and staunch culture and peculiar beliefs, it will take some convincing to change their ways and views so we have to be patient and sensitive.  On the side of Sabah, I would say there needs to be improvements on infrastructure (e.g. ariports, roads and communication), better signage in Chinese everywhere, more hospitality staff trained in Mandarin, and more and diverse fine dining that is not just based on curry, even if we stick to the Islamic Halal tradition and absence of pork-related dishes that Chinese normally prefer.  Lastly, make sure there is strong cell towers and WIFI signal everywhere they go so that they can post their ecotourism pictures to make a splash back home, making free advertisement for our common cause of promoting ecotourism among 1.4 billion Chinese.  Xie Xie – (Terima Kasih- thank you in  Bahasa Malay and Chinese!)
by Professor Vincent F, Yip