Our first stop after the Kabili trail hike was the 45,000-hectare Mangrove Discovery Center at Sepilok Laut, known as the domain of the greatest concentration of accessible Mangrove Forest in Sabah. This center is connected by a trail to Rainforest Discovery Center, a 3.5-hour hike through its inland Dipterocarp Forest of Sepilok. 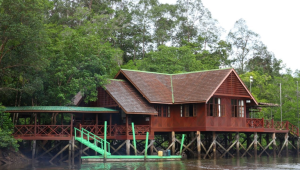 To give provide you a brief insight on mangroves – they provide many vital services to tropical regions and the people who live there, including storm protection, the filtering of pollutants and the provision of nursery areas for fish, as well as mitigating climate change by trapping large quantities of carbon (6x more than rainforests can soak up). Yet mangroves are the Earth’s most threatened ecosystem – up to 60% have been cut down or burnt out in the past 50 years alone! 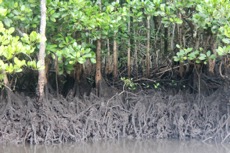 Pictured above are laterally spreading roots with attached vertical anchor roots. Because the soil in shallow areas of mangrove forests is typically flooded during high tides, many species of mangrove trees have aerial roots, called pneumatophores, that take up oxygen from the air for the roots. 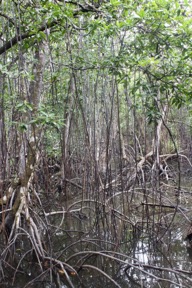 Branched, looping roots arise from the trunk and lower branches. At this stage, they are known as prop roots.They become stilt roots only when they take the function of flying buttresses when the tree is older and the bottom of the trunk becomes upside down conical and may even lose contact with the ground.

Tourists and nature lovers can access the mangrove area via bamboo a footbridge. According to the SFD Mangrove guidebook, the forest now boasts 14 species of mangrove as of 2014, up from eight in 2009. Species such as Baku Minyak (Rhizophora apiculata), Sonneratia (Nyireh bunga), and Grey Mangrove (Avicenna marina). 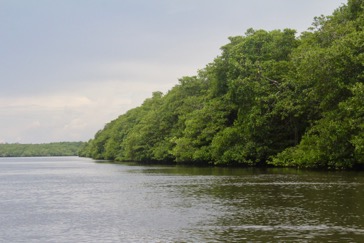 I always love a long boat ride. We wrapped up our stay at  Sepilok Laut with a half-hour boat ride at the end of the boardwalk, where we enjoyed a panoramic view of the Sandakan Bay and traced its path towards sea