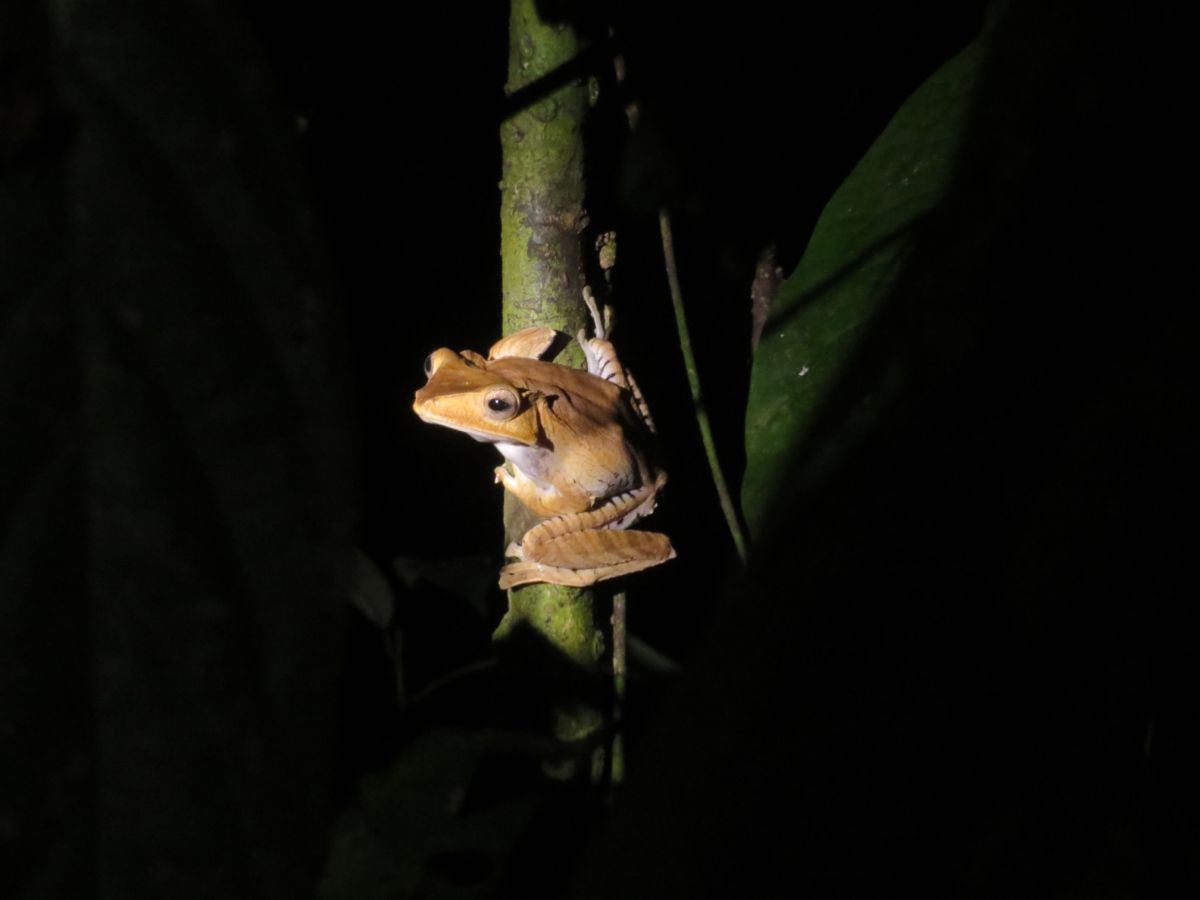 Wildlife in the jungle comes alive twice a day, once at dawn and again at dusk. As the class started our evening hike through the Kabili–Sepilok Forest Reserve at the Rainforest Discovery Center (RDC) on the evening of June 8th, 2019 the rainforest was just beginning to put on its big show. As it was my first day in Sabah, Malaysian Borneo, exhausted and over-heated from a six hour bus ride, there wasn’t much that I wanted to do besides sleep. Despite my exhaustion, it was this first wildlife experience in Borneo that won my heart over.  As my University of San Francisco Tropical Restoration Ecology class walked along the canopy bridge, I got my first glimpse at a magnificent ecosystem that I’d been anticipating to immerse myself in for months.

The jungle came alive when the sun went down ~ with sounds of forest frogs, exotic birds, and hundreds of chirping invertebrates ~ and all my senses were completely stimulated. While the sun was setting in one direction, we were watching for red giant flying squirrels in another. To our amazement, two huge flying squirrels emerged and gracefully soared straight above our heads from one large tree to another across the RDC’s canopy walk. They climbed these trees and then launched again gliding across the rainforest. The whole scene was something out of a wildlife documentary, and I couldn’t have been more entranced.

Shortly after our canopy walk, our gracious guide, Rosli, took us on a truly spectacular hike along the forest floor where the show continued. Rosli has guided night hikes for the RDC for many years, and is an expert at spotting wildlife in the pitch black rainforest. His quick movements with his bright yellow beamed flashlight from tree to tree and branch to branch, allowed him to identify so many animals that we would have otherwise missed. I saw my first kingfisher (a sleeping Oriental Dwarf Kingfisher), many beautifully decorated moths, adorable tree frogs, and too many insects and spiders to count. The climax experiences of that night was the sighting of two Philippine slow loris (Nycticebus menangensis) displaying courtship behavior high in the canopy. These adorable, enigmatic, large eyed mammals are have a toxic bite rare among mammals, deterring predators from their infants. However, they are considered vulnerable by the IUCN and their population is declining due to the pet trade.

This night hike was the most incredible way to kick-off our Borneo adventures as a MSEM Arrupe Immersion class, and my personal journey to experiencing Sabah’s wildlife. Trekking through the dark left me with an ominous feeling, and gave me true sense of much is unknown about this new world we are exploring. The jungle can be a joyously overwhelming place, and our first taste of it was just the start of what has continued to be an amazing show, day after day.