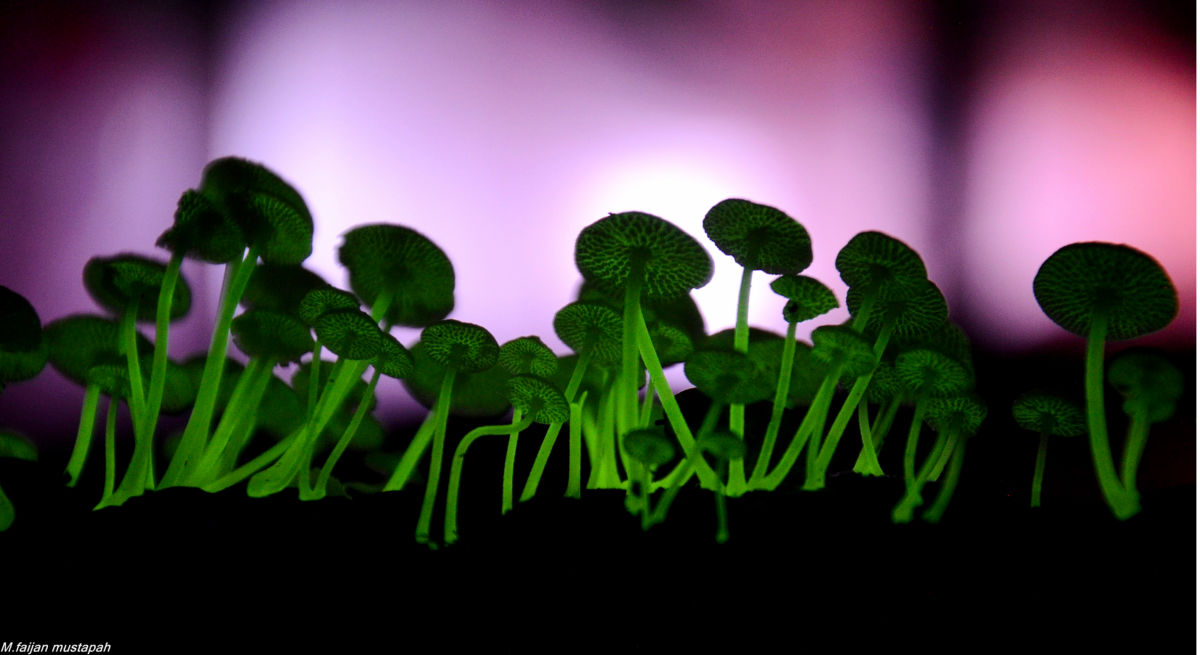 Looking for bioluminescent fungi takes a certain kind of personality. In short, you have to be comfortable in the dark. Recently, my friend Piper and I went on a quest to discover bioluminescent fungi on a night hike in the forest around the KOPEL ecocamp along the Kinabatangan River in Malaysian Borneo. We are part of a University of San Francisco Tropical Restoration Ecology Arrupe Immersion class. The recent drought in Borneo made bioluminescence a rare phenomenon for us to spot. Walking on a night hike with the blaze of flashlights from our group made it nearly impossible to detect the signature green glow of the mushroom. We quickly realized the limits of human-made light retreated a long distance behind the rest of the pack. It took a minute for my eyes to adjust and during that time fear arose inside of me. Without light, I felt vulnerable to the many creatures with a formidable bite, lurking in the shadows. It took me a few deep breathes to calm down and suddenly my other senses began to heighten. Standing in a tropical rainforest there is a symphony of sounds, my mind began to settle on the beautiful melody of chirps and croaks. Before I knew it, two green floating disks began to appear right in front of me. They looked like alien saucers lifting off into space. My heart leapt at the sight of these two little guys. They were bioluminescent fungi!

Different from other kinds of light, bioluminescence does not come from the heat of light bulbs or the sun. It is a kind of “chemiluminescence” (chemical reaction where light occurs) where luciferase, the enzyme, interacts with oxidized luciferin to create oxyluciferin. This chemical reaction creates light. Biologists often use bioluminescence as a reporter gene attached to a desired study gene that allows scientists to follow the gene via fluorescence. One novel experimental idea uses bioluminescence in trees to light up city streets at night. There is still so much to be studied about bioluminescence.

There are roughly 80 different species of known bioluminescent fungi scattered around the globe. It is unknown to scientists why fungi use bioluminescence. The leading theory is that it attracts insects to the light, which through contact with the fungus, spreads its spores to reproduce. Bioluminescent fungi can be found on decayed logs or leaves in humid tropical and temperate forests. After speaking to Faijan, our local field guide and photographer from KOPEL, I found out that just four months prior to my visit, before the two month drought, countless patches of glowing fungi could be found all around the forested ecocamp. Within the time of four night hikes at the ecocamp I could only find the two bioluminescent fungi in the picture to the right. I did not have a camera that could take an extended exposure duration shot so I just used a flash. With the recent drought and climate variability experienced in Borneo,  bioluminescence may become less common.

Feeling the magic of bioluminescence, especially through these two little fungi, I learned that taking the time to stand in an environment without flashlights allows one to see and hear the natural world in an intimate way that I could have never possibly imagined. The dark is a realm that I hope to become more comfortable with. This fantastical experience actually ended up feeling calming to the soul.

“Look deep into nature, and then you will understand everything better” –Albert Einstein