Greetings from Borneo! We finally had all the missing pieces assembled for our class last night. We enjoyed a great barbecue with our KOPEL colleagues we worked the week previous, the KOPEL director, and fellow graduate students. The food consisted of locally caught wood fish, vegetables, eggplant, and watermelon. In the morning, after a well-earned sleep, we left the Sepilok Bed and Breakfast for Sepilok Laut and the mangroves. Our hike on the Kabili Trail was 8 kilometers or 5 miles through the ancient primary growth Bornean Rain Forest. Primary growth means the forest has not been logged or disturbed significantly by humans. Borneo is the oldest rainforest in the world having survived Earth’s last ice age. This forest is referred as a dipterocarp forest since the trees are primarily diptercarp trees. The diptercarpus family is highly valued tree for its lumber. Much of Borneo was logged in the last century, so having this remaining stand of forest is special to witness. This area of Borneo was preserved due in part to the steep hills and terrain that made it impracticable to harvest the trees. 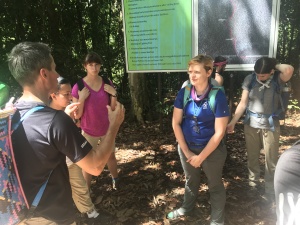 Figure 1. KOPEL Director, Martin Vogel provides a safety brief to students prior to disembarking on the hike. Martin chose to hike with traditional Malaysian backpack made from local rattan vine.

Our hike started with a safety brief and issuing of lunch and snacks for the hike. In order to prevent heat related illness each of us stocked up on 4 liters of water and carried a sufficient amount of snacks.  I was impressed by the KOPEL staff – who were fasting while observing the Muslim holiday, Ramadan. Along the way, some of us chose to jump in the natural pools  to cool off. We also took a few breaks at designated Gazebos along the day. We shared the path with no one else today, but the eerily loud cicada’s. The crescendo of sound made me feel as though I was in a thriller movie. We passed through a series of hills with carved out steps. The retaining steps help maintain the trail and reduce erosion during rains. The trail designers did not incorporate switchbacks into these trails, so it felt as though we were going straight up or down the hill.  The most significant leaf we found along the trail was from the Cabbage Dipterocarp, named so for its cabbage shaped leaf.

Figure 2: Trekking Path. Data obtained using iPhone and Gaia GPS app. Map courtesy of Google Maps. The trail was located in the Hutan Simpan Forest Reserve and required us to have a permit to walk the trails.

During our hike I used two methods to gather data on our hike. I used my  Apple iPhone 7 with Gaia GPS ( $15 USD). The app leverages the built in GPS of the phone (even in airplane mode) to track the hike. The application was able to record the tracklines. Using the application, I was able to edit, export, and save the tracklines in .kmz and .gpx formats. I displayed the above map – Figure 2, using a plug-in for chrome to display .kmz track lines on Google Maps. The Gaia GPS website can also display the elevation profile, distance, and speed of our hike. I used a Garmin GPS to record data points, but was not able to load and or edit these using my usual preferred software.

After the third and final large hill, we arrive at the mangroves of Sepilok and Sandikan Bay. The path transitioned from gravel infill to boardwalks as we emerged from the tall dipterocarpus forest into the shorter mangroves. Our destination, Sepilok Laut was designed as a welcome center and research station on the edge of the mangroves. As the sun set in the mangroves, we did see a few Long-Tailed Macaques who were making their home in the trees.

Figure 4: Buttressing. This a morphological feature of trees in tropical rain forests.