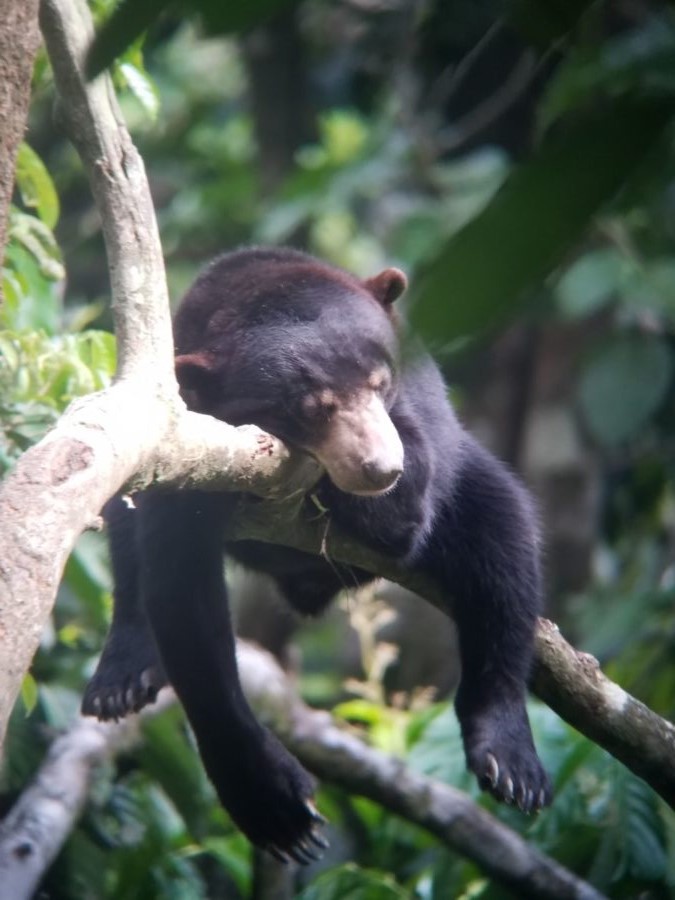 Fulung is an adult male sun bear who has the pleasure of calling the Borneo Sun Bear Conservation Centre (BSBCC), of Sepilok Borneo, home. Sun bears are the world’s smallest bears with the longest tongues. Sometimes referred to as honey bears due to their affinity for honey or dog bears for their unique barking call, sun bears can be identified by their unique chest badges which vary in shape and size for each individual. These bears are incredibly important to their environment as they are ecosystem engineers creating habitat for other animals, acting as a biological control for termites and other species, while also propagating various plants and trees through the spreading of seeds. Unfortunately sun bears face many challenges. While not critically endangered, sun bears maintain a venerable status in the wild with a population decline of 30% in the last 30 years. This decline can be mainly attributed to human interference through habitat destruction and the sale of their body part for traditional medicinal purposes. Borneo has become the last stronghold for sun bears with 50% of the tall forest canopy that the bears call home remaining intact.

Recognizing the plight of the sun bear, Dr. Wong Siew Te founded the BSBCC to help the most vulnerable bears such as Fulung who can no longer survive in the wild. Fulung was found as a cub by a hunting dog and has since become habituated to humans to the point where he no longer believes that he is a bear. If Fulung were to be released, he would immediately search for the closest human to befriend and fall into the hands of poachers. The BSBCC has been open to the public since 2014 and currently houses 44 bears. The newest arrival was this past Saturday – a baby bear that was rescued from villagers who kept her in a tiny cage. Since its conception only 5 bears have been deemed fit for release with their first candidate being self-selected – she escaped. This bear eventually returned for food, and following an examination was found still healthy after her time away. Having proved itself able to survive on its own, Dr. Wong was therefore able to give the bear a proper release far from the centre.

In addition to facilitating the rehabilitation and potential release of these bears, Dr. Wong uses his centre as an opportunity to educate the public about bears and conservation in a non-intrusive way. Dr. Wong stresses the importance of putting the safety and health of his bears first and uses eco-tourism to responsibly educate the public and sustain his work as a nonprofit NGO. As part of the Tropical Restoration Ecology course with the University of San Francisco’s Masters of Environmental Management program, I visited and critiqued multiple examples of eco-tourism all with varying degrees of success. After being given a behind the scenes tour of the BSBCC, viewing the facilities and interworkings of the site, we, as a class, were able to determine that the BSBCC modeled the best form of ecotourism possible. The educational value of the BSBCC is far greater than any zoo equivalent that I have experienced in the United States and in no way does the centre take advantage of the bears by putting the potential earnings over the animals care. Being an NGO Dr. Wong needs to implement creative ways to keep his centre self-sustaining. One such way is through their adopt a bear program. As a class we took the opportunity to adopt Fulung as great way to learn about sun bears while helping BSBCC meet the costs of rehabilitation. Dr. Wong can be often found talking to his latest group of students, tourists, and visitors sharing his expertise and helping view the bears through a spotting scope from a safe distance. Having the opportunity to speak to experts, such as Dr. Wong, about the ecosystem and environment of Borneo has been an unforgettable experience. I hope to someday make as big of an impact as Dr. Wong does on a daily basis. Thank you to the USF Environmental Studies (BA-ENVA) and Environmental Management (MSEM) programs for making this field class a reality for me.