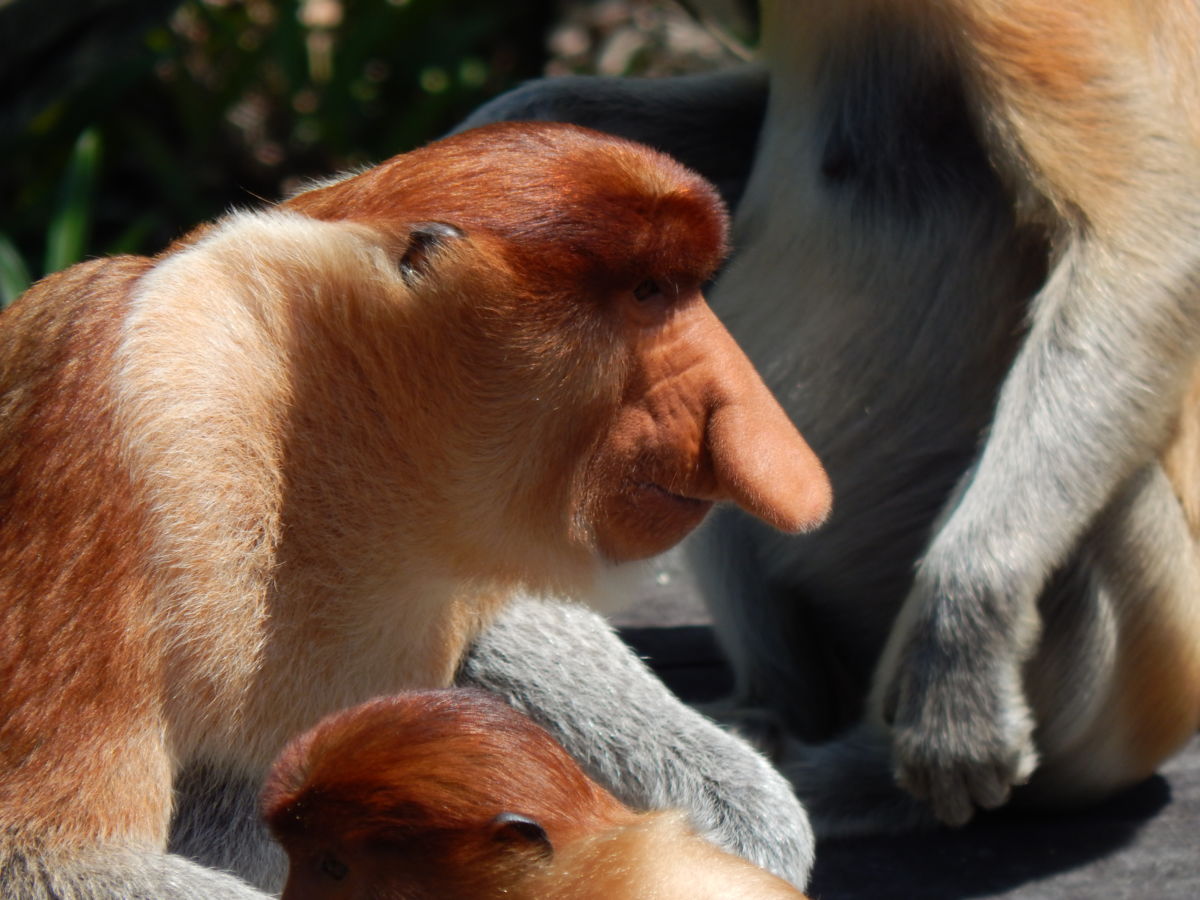 On Sunday, June 17th, our Tropical Restoration Ecology class from the University of San Francisco’s MSEM program drove out to Labuk Bay Proboscis Monkey Reserve, located near Kampung Samawang in Malaysian Borneo. The Proboscis Monkey (Nasalis larvatus) is endemic here, only found on this island of Borneo.  Mature males have unusually large noses, pot bellies and toupee-like hair. Led by the alpha male, these charismatic and unusual looking monkeys live in harems of up to 40 individuals.

They have declined in population and are Endangered due to deforestation of the rainforest, which is most often replaced with oil palm plantations. The Proboscis Monkey relies on its home in the rainforest, primarily because of its diet. They mostly eat large amounts of mangrove leaves and get  most of their water from the leaves that they eat. Because of the lack of rainforest left in this area, their population has declined and have been pushed back to small mangrove forest remnants. Along with the population of Proboscis Monkeys, there were also a group of Silvered Langurs (Trachypithecus cristatus) that enjoyed hanging out in the area, which made it all that much more of an exciting experience.

Due to these circumstances, it would make sense to have a reserve dedicated to this species. A reserve would also bring in money to the area, surrounding community, and land owner that would have otherwise converted it into a oil palm plantation. This is exactly what the people from the Labuk Bay Proboscis Monkey Reserve did. They have created an area for tourists to enjoy and witness these fun and adorable primates!

Unfortunately, there were a few key situations that could be managed better. During our time there, employees fed the monkeys food that didn’t seem applicable to their diet. The primates were fed bread, zucchini and pineapple – no mangrove leaves or anything that seemed close to their natural diet. In fact, further research on what they eat concluded that giving them bread could be lethal to them because of the way that their body breaks down sugar. They didn’t have large bellies like they are supposed to in the wild. Another issue was the fact that tourist were getting so close to the wildlife. Several tourists were petting the monkeys, yanking on their tails, and taking selfies with their backs turned to them. This sets an poor example for other tourists and children watching adults do this. In addition, there were no staff or docents directing people to not interact with the wildlife, and there was only one small sign in English to not feed the animals.

Ecotourism is essential to ecosystems and wildlife in developing countries, but only when it is well managed. We found that this ‘sanctuary’ could make more of a difference in helping save this proboscis monkey population and habitat by educating tourists that come through their facility. We highly recommend that all tourists be required to view the documentary film that was shown at one of the feeding platforms. It discussed Proboscis Monkey biology, life cycle, reproduction, habitat threats and conservation, however we were the only tourists that watched the entire film. The sanctuary could really help conservation by simply hiring a couple of docents to make sure that tourists do not come in such close proximity to the wild animals and posting educational signs about the monkeys. Labuk Bay Proboscis Monkey Sanctuary has the potential to be an amazing ecotourism opportunity for conservation, but has a long way to go if it is going to have a significant effect on conservation of this charismatic, endangered monkey.

Stay tuned for four other adventures in Wildlife Ecotourism in Borneo – the good, the bad and the ugly….