As a wildlife conservation enthusiast who has worked for a rehabilitation project in Africa, I was ecstatic about being able to see how Malaysia handled their animals. There were mixed emotions within the group, about whether animals should be kept in enclosures or not, but we popped over to the sun bear and orangutan centres to see for ourselves. The Sepilok Orangutan Rehabilitation Centre was founded in 1964 to rehab orphaned orangutans. The site is 43 square kilometers of protected land and is home to around 80 orangutans in the free reserve, and 25 orphaned orangutans in the nurseries (orangutan-appeal.org). The centre provides veterinary services, dietary supplements, and daily feedings. According to the centre, the feedings are designed to be monotonous and boring to encourage the apes to start fending for themselves. We were able to see a young female that had arrived only a couple days prior, and a mother with her babe. The centre also holds numerous fundraisers.

The Bornean Sun Bear Conservation Centre (BSBCC) actually worked with a program that we have become familiar with since our time in Sabah – Land Empowerment Animals People (LEAP) – and have been developing their centre since 2008 with the help of the state forestry and wildlife department. The development of BSBCC has gone through four phases. The first was the bear house and enclosure in 2010 – which gave the 12 bears at the time to room to move and have access to outdoor enclosures during the day; according to the BSBCC, this was the bears first opportunity to step onto actual soil and tap into their instincts. The second phase was the observation platform in 2011. The third phase took place between 2013 and 2014 with the construction of a second, larger bear house; the larger house gave BSBCC room for 16 rescued bears. Phase 4 was the second observation platform and forest enclosure – which we saw them working on today.  Funding for the conservation center has been predominately by LEAP; however, the Sabah State Government matched the funds that were raised during early fundraising projects (bsbcc.org.my).

I still have my own personal opinions about the size of the sun bear enclosures and how animals should be enclosed, but it is easy to be an outsider and judge their procedures here. What I have learned is that environmental policy in Sabah can more complicated than getting through to someone at AT&T customer service. If anyone is interested in either of the conservation programs, check out the links below, and keep an eye out for more #TeamBorneoUSF blogs to come. 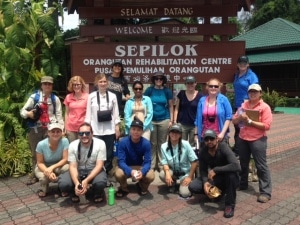